Czech Open (1000 pts) welcomed 203 players from 15 nations (Czech Republic, Slovakia, Slovenia, Poland, Hungary, Serbia, Croatia, Belgium, Germany, Russia, Latvia, Lithuania, Ukraine, Sweden, Switzerland). Masters was played on 13 courts for adult categories (Saturday from 3 p.m. 19 courts) and 12 courts for younger categories on Sunday. The lunch and refreshments was prepared for all players. Semifinal and final matches had head empires and line empires. Winner in each category received the medal, a cup, protein from tournament sponsor WE FOOD and the crossminton racket BLADE PM. For the finalists and semifinalists the medals and protein were prepared. In Open Division and Female players won price money.

In Open Division the draw was full of the famous names from the TOP. Mihailo Mandryk from Ukraine showed a high quality crossminton and in the final, he defeated Swedish Melker Ekberg 16:9, 16:13. In Open doubles the world’s number one Petr Makrlík with the single finalist Melker Ekberg won against Czech-Slovakia team Daniel Knoflíček, Adam Kakula 16:12,16:12.

Lori Škerl from Slovenia ruled to Female category and in the final she measured her strengths with Czech Eliška Andrlová. The tough match has a happy ending for Slovenian player Škerl and she won 16:13, 16:10. In Female Doubles the Slovenian team Lori Škerl, Danaja Knez ended up at the first place.

The other results listed below 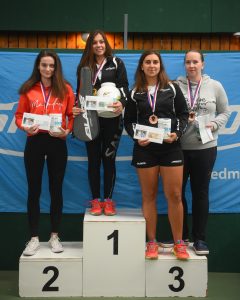 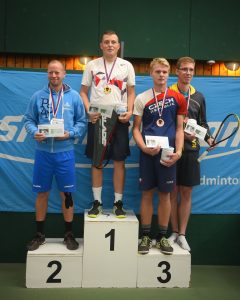