Title in U12 Male for Ščavnický

The title of the Youth European Champion in U12 Male comes to Slovakia to Ján Ščavnický jun., who had his category under powerful control. In the semifinal he won against Kamil Jančuski from Lithuania 16:9, 16:9. Richards Barkovs from Latvia and Slovak Branislav Bujnáček played the second semifinal. During the tough mach, Barkovs showed mental strength and finally won 16:13, 18:16. In the final, Ščavnický was a better player and defeated Richards Barkovs 16:13, 16:7.

U12 Female under Lana Glavač’s control

In U12 Female the roles of favorite Lana Glavač from Slovenia and Czech Zuzana Holešinská were fulfilled. In the first Slovenia semifinal Lana Glavač played against her double partner Ema Stella Novak. Both players know each other well, so the first set had no winner for a long time. Finally, Glavač made it up and defeated Novak 21:19, 16:4. Second semifinal was in the hands of Czech Zuzana Holešinská, even though her opponent Janka Gergo from Hungary was second seeded, and Zuzana won 16:12, 16:8. The final clash between two rivals Lana Glavač from Slovenia and Czech Zuzana Holešinská ended up better for the Slovenian player. Glavač won 16:13, 16:10 and gain the title of the European champion in U12 Female.

U 10 mixed category showed the young talents where the domination of Polish player Zuzanna Bezak was obvious. The final was full of precision from Czech Jindřich Pojmon. On the other hand, Zuzanna Bezak used her strength qualities, and with the aggressive play she beated Pojmon 16:12, 16:14. Zuzanna Bezak and Filip Miloň also won a title in U10 Mixed doubles.

The winner of each category received a cup, medal, crossminton racket Blade PM and protein for kids from the tournament sponsor WE FOOD. For the finalists and semifinalists the medals and protein for kids were prepared. During the championship the refreshment for players was available. What was highly appreciated, was the chance to see the best players of the tournament Master Series 1000, which was concurrently played at the Brno’s indoor hall.

The other results listed below: 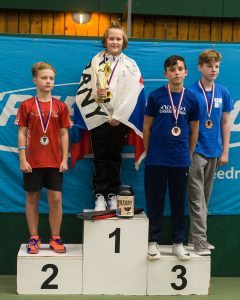 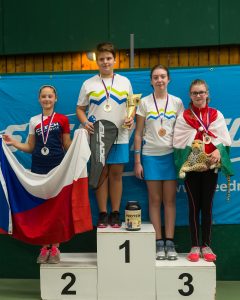