Equipment – International Crossminton Organisation
Rackets
The first rallies in Crossminton have been played with regular Badminton an Squash rackets. Badminton rackets have been to fragile for the power of the game, Squash racket on the other hand have been to long and not agile and fast enough to handle the speed of our Speeders (birdies). Therefore our sport needed special shaped rackets. Crossminton rackets have a similar length than racketball racket, but shall not exceed 61cm. The head of our rackets can have different shapes, most looking close to rather Tennis or Squash frames and shall not exceed a head size of 650cm2.
The most popular rackets are between 125 and 145grams in weight and build for a mix of graphite, carbon and kevlar. 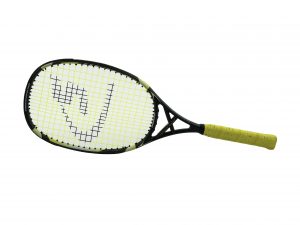 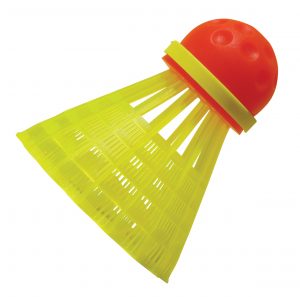 A Crossminton birdie generally needs to be within the following specs:
Courts
Crossminton is played on a court consisting of two squares of 5.5 x 5.5 meters which are set up in a distance of 12.8 m.

In Crossminton there is NO NET! The game idea is to hit the birdie over the 12,80m gap into the other square.
Crossminton singles and doubles is both played in the same court dimension.
The width of the line when using the court lines has to be at least 2 cm and may not exceed 6cm.
The width of the lines has to be consistent.
Each court has a service mark 3 meters behind the front line. 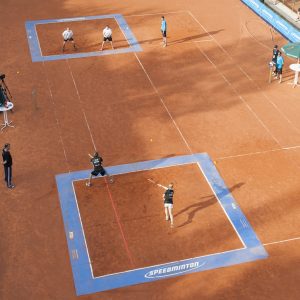 Crossminton courts can be setup on almost any surface and are easy to carry so the game can be played competitive in many places.