During the first day the 7 courts installed for the most important tournament. Fantastic experience in the sixth edition of the Spanish Open played last weekend at the premises of the Municipal Sports Pavilion Vecindario. This tournament has become the celebration of our movement, a group of crosspañer@s who share this space of leisure, sport and competition every year. Space in which players from different countries gradually join, enriching us in every way. During this edition Hungary, Slovenia, Germany, France and Holland participated.

This year as a novelty, the junior U-12 and junior U-18 categories were disputed, the quarry being the base of any pyramid. In addition, we practice the crossminton sitting modality, a category designed to include us all equally, within the “Crossminton Without Barriers” project directed by Carla López.

Regarding the competition, during the first day the individual group stage of the Open Division, Open Women and O-40 categories was carried out. This phase ended without major surprises, passing almost all the series heads to the knockout round. Highlight the victories of the local players, Chaxi López and Raquel Díaz, before the No. 3 and No. 4 series heads, the French Alexandra Desfarges and the Hungarian Kitti Dósa-Kácz.

In addition, all the players were testing during the whole day the modality of Crossminton Sitting, where Carla López instructed all the participants.

Sunday’s day was a diversity cocktail, where categories were held from 10 years onwards. The junior U-12 and junior U-18 categories were disputed, leaving champions, Idir and Elena, respectively. The young participants enjoyed a very fun and enriching day, being able to share a track with ICO circuit players. The Open Women O-40 category was also played, where the Hungarian Krisztina Tákacz won. In the crossminton sitting a fun tournament was played with a total of 19 participants, proclaiming champion Dutchman Marcel Van Der Laan before the Sevillian Jorge Gutierrez.

Regarding the ICO categories, the first final to be played was Senior O-40, resulting in German champion George Nilos, against Slovenian Matjaz Sustercic (16/11/11/12), thus adding his 5th Spanish Open. Next, the Open Division final was resolved in favor of Daniel Robles, beating Carlos Hernández, thus achieving his first Spanish Open. The ICO categories closed with the Open Women final, where Slovenian Jasmina Keber, three-time world champion, won her 100th victory in ICO tournaments, against Germany’s Anja Rolfes. A final level to close an edition that will go to our little story, for the magnificent atmosphere lived in both days. 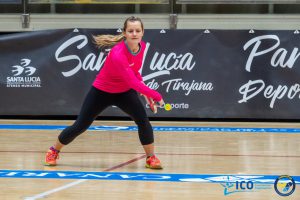